I had a very reasonable nights sleep considering I slept in a barn. It is always a good night if I wake up fewer than six times. It took quite a bit of time to get all the gear packed up as everything was so hastily thrown together in the storm last night.

While the morning was cold, I did have a hat and gloves. In addition, I thought that would be good in reducing the mosquito population. The sky was a brilliant shade of blue and the wind was light. The first five miles in the morning just drifted away.

Since leaving Winnipeg I had seen many farm buildings in various states of disrepair. I always wondered if the buildings were designated historical buildings so that they couldn’t be taken down, if the buildings were abandoned or if there was some other explanation entirely. At the very least I would take the structures down to use them as firewood.

As the day warmed up I stripped down to my PFD on my upper body. I always enjoy the complete unrestricted movement while paddling. Also, I will probably never know when it is the last time I can paddle without a shirt with the cold weather moving in.

The river narrowed markedly to the point where I could throw a rock across it. I thought about just that. I didn’t want to just say that I could do it; I wanted to do it so there was no hyperbole.

For lunch, Kobie and I stopped at the junction where the Cheyenne River entered the Red as there was a low bank where we could sit and dine. After lunch I went back to the thought of throwing a rock across the river, but had one problem: I couldn’t find a rock. As I searched I had to settle for a hardened clump of mud. I heaved the projectile and while it broke up in mid flight, the majority of it reached the opposite bank, which I consider that a success. Either the river was in fact narrow or I have a really good arm. Given how tired my arms were from paddling, the smart money would be on the former.

The river was different than up north as there were now many tighter turns as opposed the big loops. The river didn’t have the power to carve wider turns. Paddling had become easier as the water flow had dropped, but now there was so much debris in the water, mostly in the form of downed trees, but also of old farm machinery and household goods, that the river was a veritable obstacle course. One of the bigger problems was that we regularly encountered was when a downed tree blocked a majority of the river width, causing 100% of the water to run through 40% of the space. It involved some vigorous paddling to make it around some of the partial dams. Also, even when the river was clear, Kobie and I weren’t able to reasonably paddle next to one another. 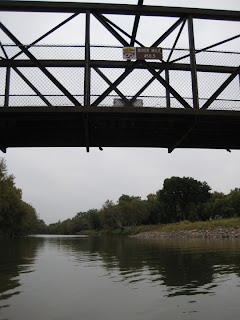 It was rough going in the afternoon. At times it felt as if the viscosity of the river actually changed and not to our benefit. Part of my frustration was that my kayak was still misbehaving. Not only did it want to constantly turn left, but the skeg, which is meant to keep me running straight, was wobbling back and forth bouncing off the sides of the skeg box. That was when it wasn’t just flat out vibrating.

As we neared Fargo I saw the first Red River mileage sign, which my map claimed would be all over the river. I guess I just missed the others as the first one I saw was at Mile 440.

Nearing large cities it gets more difficult to find places to camp. I had called the Parks department in Moorhead, MN across the river from Fargo, ND and asked about camping in one park north of town, but was told that there is no camping under any circu 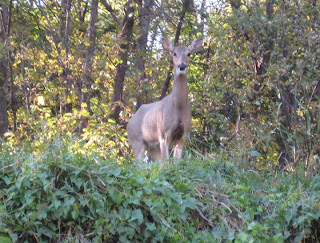 mstances. While the park didn’t pan out, we were able to find a small wooded peninsula where we could hide for the night. While the campsite was fairly secluded from people, we were discovered by a deer. The deer came by every couple of minutes and snorted in anger only to return shortly thereafter. This went on for a half hour before I got out of my tent and hurled a stick in its direction. Where is that deer in hunting season?
Posted by Kevin Knieling at 9:03 PM