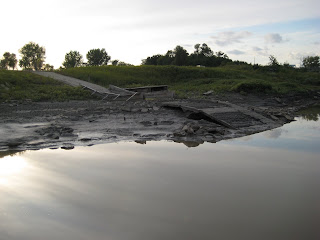 It turned out that it was in fact easier getting the kayaks down to the water than up. We had a planned stop in the town of Morris that afternoon, so I got rid of nearly all the remaining water I was carrying; what a difference.

The morning was chilly and it was still overcast with some spotty rain, but it wasn't nearly as bad as last night. The wind had picked up and I don't think I have to mention which way it was blowing.

The river straighted out somewhat and as the town of Morris was our goal, it made for a short day. Other than one or two sections where the wind blew hard, it was an uneventful paddle.

I had called town hall in Morris ahead of time and queried as to what facilities and/or amenities were available. I was told that there was a boat ramp and camping available right on the river. I think they oversold the concept of a boat ramp to me though. It certainly seemed that they had begun building a boat ramp, but thats about where it ended. I would like to see someone launch a boat on that ramp. We did manage to get our kayaks in, but it wasn't as easy as we had hoped. I guess if trips such as this were easy everyone would be doing them.

Later that night we were met by what I can only describe as our fantastic support staff. Kat, from Wilderness Supply drove down to Morris with her husband and brought us, among other things, a replacement tire for the kayak cart. The two were camping for the night so we made a campfire and enjoyed the conversation.
Posted by Kevin Knieling at 8:25 PM