I had an absolute fantastic nights sleep at Riverside, as we had dubbed our campsite. In the morning though we didn't get any early sun leaving all of our gear covered in condensation. Had we camped on the other side of the river in North Dakota as opposed to Minnesota, we would have gotten the morning sun, but we rank the campsite as one of our better ones. For nearly all of our trip, the river upon which we paddle will be the boundary between two states.

As I set off paddling, my right shoulder felt like a rusty gate hinge that had been weathered for all of my 36 years. Despite a great nights sleep I had a few aches. The rusty gate opened and closed a little easier as the day wore on, so I was guessing that I slept on it for too long. The sleeping mat which I use is like sleeping on an extra firm bed, so I roll over quite a bit in the night. I have a hard time sleeping on my back and when I do I tend to snore, something Kobie wouldn't really appreciate as we usually pitch out tents close together.

There wasn't a single cloud in the sky and the day was shaping up to be good one. That was at least until the wind chimed in. I did however end up paddling the entire day sans shirt. I was making a bid to turn my truckers tan into a farmers tan. While we probably don't need to wear our PFDs on this tame section of river, Kobie and I try to get into good habits and stick to them, which means always wearing our PFDs. 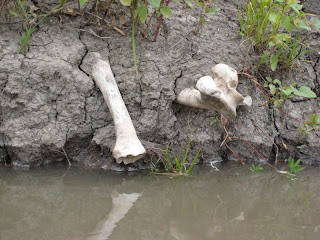 We had been seeing several "dump" sites over the last few days. It seemed that some people dumped pickup truck loads of debris in the water several decades ago and in the oxygen poor clay, the debris didn't erode. There were old bottles, toys and even and old wagon wheel in one of the piles. Another common sighting along the banks of the river are bones sticking out of the mud. The majority are most likely from cattle, but a number also belong to bison that used to roam the area.

In the afternoon, using the GPS we made the fun but disheartening discovery that the speed at which we were traveling up river was less than that when we were floating backwards with the current and being pushed by the wind. We just hoped that the math would work out a little better when we had the current in our direction.

We were looking for a place to camp and had several issues. The river bank on the Minnesota side was dry but steep, whereas the bank on the North Dakota side was flatter but seriously muddy. It took some work, but we found a small patch of dryish ground covered in tall grass where we could fit one tent, so we had to share a tent fort the night. 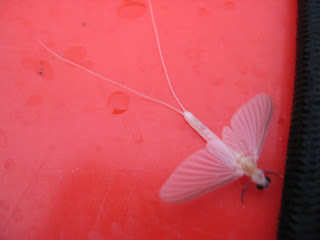 Throughout the afternoon, as with several previous there was an insect hatch on the water. It was very late in the season for mayflies, but there they were hatching on the water. The area above the water was dotted white with the Ephoron Mayfly. Hundreds of fish were rising to the surface to feed on the emerging mayflies. I was getting bitten by mosquitos, but I was entranced by the growing number of mayflies. at one point the sky was so thick in Mayflies it looked like snow blowing about. I am a fly fisherman and have seen some good hatches before, but I had never seen a hatch as think as this one. I went to sleep with pictures of mayflies dancing in my head.

I woke up in the middle of the night to answer the call of nature and as I exited the tent and looked up, the stars were in full glory, shining as brightly as I remember seeing them anywhere in the United States. The constellation Orion was overhead and glowing with a fullness that radiated from the stars many years ago.
Posted by Kevin Knieling at 1:28 PM