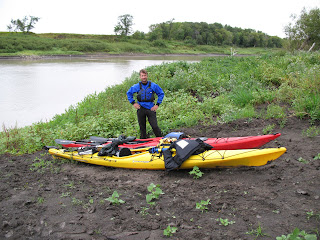 We woke up to relatively clear skies and zero wind. It was a relief paddling along, battling the current alone. Boat traffic had also ceased so we had the river all to ourselves. The river had remained constant over the last few days with respect to width (150 meters), scenery (fairly steep muddy banks) and current (fairly light, allowing us to paddle a comfortable two Miles per Hour). There were one or two sections where the river narrowed dramatically around a turn and the water rushed through. It was a fun break in the monotony of this part of the river to have to paddle full out to get around a bend.

The morning could not have been more pleasant. It was in the afternoon when clouds rolled in a light rain began to fall. I didn't think much of it,but the light rain soon became a torrent. Then thunder. Then lightening. We needed to get off the river and fast. The same problem arose in that there was just no place to get our kayaks off the river and up the muddy banks, much less find a place to camp. We continued on until we came across a clearing. It was still steep and muddy, but it was free of any greenery impeding our progress.

This would be our first real introduction to the Red River Mud, or Red River Gumbo as it is referred to. Anyone familiar with the Red River mud is probably laughing right now as they know all about it. Red River mud is like clay, which has amazing properties of stickiness, water retention and the ability to suck footwear off of feet. Red River Gumbo is truly an amazing substance. You can have a clop of mud the size of a cinder block stuck to your foot, before a section gets too heavy and falls off. Someone mentioned to us that the mud gets on nearly everything. I would just like to amend that statement and say that it gets on everything, no exceptions. I looked in a bag I don't think I had opened since leaving Winnipeg and sure enough, there was mud in there.

I volunteered to go first to shore and as I was wise to the mud, threw down the two sections of my spare paddle to tread across on to firmer ground. I made my way up the bank and declared that it was where we would be camping. I went from warm and shirtless to wrapped up in rain gear and literally shivering. I was done for the day and this spot would have to make do. The only thing standing in our way was obtaining the permission from the house that was a few hundred meters up the muddy path. The march up to the house was no less pleasant or less muddy than getting up the bank itself, just not as steep. No one was home, so we decided to leave a note on the door and hoped it was OK to camp. As Kobie pointed out, they would have to be really bothered with us being there to go through the effort of traipsing through all that mud in the rain to get to us and tell us to leave.

We managed, with great effort mind you, to get the kayaks up the rest of the muddy bank but just barely. We were hoping that gravity would help us get them back down the bank in the morning.
Posted by Kevin Knieling at 2:20 PM