Rain, Mosquitos and Wind, Oh My 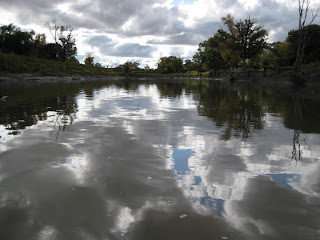 I got very little sleep as there was high wind and heavy rain along with thunder and lightning. What struck me as odd was that someone was milling about the boat ramp at 4 AM in what can best be described as inclement weather. Given who was hovering about the prior evening, it gave us some cause for concern, though it was most likely a hard core fisherman. Miscreants are always a concern when camping in somewhat public areas, but this night, as with all others to date, we didn’t have any problems.

Fortunately the morning was clear so we didn’t have to worry about paddling in a storm. I drove into town to pick up our supplies and when I got back Randy was waiting at the boat ramp to send us off. His kindness was quite unbelievable. I was fairly certain Kobie and I would meet tons of nice people on this trip, but my expectations were dwarfed.

There seemed to be many more shallow spots in river as we paddled on. There had been numerous areas with shallow water before, but not nearly as many. We had to make an effort to steer further around the outside of banks, no more taking the line a race car driver would choose navigating the bends.

Despite all the rain overnight, the river didn’t really rise. The wind gave us no break though as it was howling straight out of the south for the second day. As I paddled, the water drops coming off the end of my paddle blew straight into my face. I also learned that paddling against the wind is much like getting a plane to fly. It takes an inordinate amount of lift and thrust to get a plane aloft as opposed to solely keep it from dropping out of the sky. I have seen many an airline passenger give the armrest a white knuckle grip when the pilot throttles back after take off. It is the same with a kayak. Once up to speed, it is much easier to maintain that tempo against the wind. One of the main differences between the plane and kayak example as far as I am concerned is that a pilot simply has to give the aircraft a little more throttle whereas I have to manually paddle like the dickens. 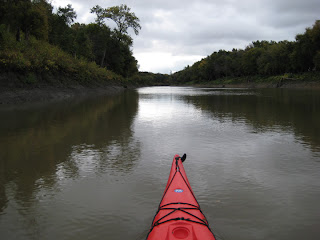 I didn’t see much in the way of wildlife, or at least didn’t notice it, possibly because I was gritting my teeth and focused on paddling. Despite the harsh wind though, the afternoon brought more in the way of shelter from the wind in that the river seemed to be looping east and west with only small sections of the river running south. In a narrow river like the Red, it is easy to change which bank we are paddling against to avoid the wind. When we get to the Mississippi River though, it will be a different ballgame as the river is several miles wide in spots.

While concentrating on paddling I did notice that leaves are changing color and some trees are dropping their leaves. It can only mean on thing: Autumn. It may be a bit of an oxymoron, but I thought the scenario brought life to the river, at least in color. It gave me something to look at other than green brambles and a muddy brown river.

Late in the day we realized that there was too much mud in the area for good camping, but after having paddled a hard day finally settled on a place we dubbed Mosquito Hill. I was so tired and really didn’t feel like doing anything, but knew I had no choice. I did everything I could to get my tent up as quickly as possible and dive right in. As I scrambled to set up the tent while fending off the persistent mosquitos I thought back to my bike ride earlier in the year and knew I made the right decision staying in a hotel each night. No bugs, a hot shower and a comfortable bed.

I was thrilled that we had found a place to camp, but I had never in my life seen more mosquitos than were hovering about looking for a meal. I say that I have never seen more mosquitos as I didn’t think there were any more. Period. It seemed that every mosquito on the planet was within a ten foot radius of our tents.

It was quite warm after my harried effort to get into shelter, so I sat in my tent for a few minutes to relax and cool down. As I sat there I heard a constant high pitched drone. It didn’t take me long to figure out that it was a large collection of mosquitos trying to gain entry to my tent. The noise sounded like a remote control car rally, with their miniature engines whining. I sat in the tent and watched the mosquitos attack the screen. I had absolutely no intention whatsoever to exit the tent for any reason until morning, so it was a can of cold soup for dinner. After dinner I used the can as a spittoon while brushing my teeth and convinced myself that I didn’t need to go to the bathroom.
Posted by Kevin Knieling at 3:10 PM