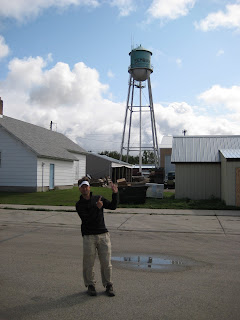 We took a day off in Pembina to see the sights. Seriously though, we took the day off to rest and get things done. On a trip like this a day off isn't really a day off. It involves planning how the trip proceeds from town, resupplying, doing laundry, doing a little writing and what ever else you might have to tend to, such as Kobie's broken rudder.

As I was walking along to the laundromat I realized that I really like small towns. I am not saying that I would want to live in one, but I do like that the towns have personality. I love that in a random conversation with someone (which doesn't really happen in New York City), I can find out when and why the town was founded, about the flood in 1997, or any number of other things. I also like that people waved to me as I walked down the road. All the people are very real. No one is putting on airs, but are just being who they are, doing what they do.

We closed out our night with a few beers and another pizza at "The Spot". Should you happen to be in Pembina, ND, I recommend stopping in for the Taco Pizza.
Posted by Kevin Knieling at 6:14 PM