It should be no surprise that we were chased out by mosquitos in the morning. The tall grass was an ideal hiding place for them and as we got up and packed the tent away, we must have woken them up.

While the river pushed against us, it was mirror smooth, broken only by the periodic branch breaking the surface or rising fish in search of an easy meal riding along on the current. Deer were waking and rising from the tall grass near the river. I never tire of the mornings on the river, not just that it means we have broken camp and escaped the wrath of the mosquitos, but that with every paddle stroke we inch our way closer to the Gulf of Mexico.

Around mid-day things on the river can become a little stale, but it gives me the opportunity to look at things on a finer scale. One good example is that I noticed when a pelican takes flight, its feet move in a hopping motion as opposed to other avian creatures such as the Canadian Goose, which employs a running strategy. OK, I think some of you may have actually died of boredom reading that sentence and it is probably information that I will not ever need or reference ever again in my entire life, but it is one of the nuances of nature I get to observe first hand each and every day as I paddle along.

Another observation is that when looking at the water when I paddle it appears as if I am moving quite quickly. Unfortunately for me though the river is traveling in one direction while I travel in the other. It is the same as two cars driving in opposite directions. While the two are moving away from one another at a good clip (their combined speed), each car is moving much slower when measuring from fixed point. Glancing from the water over to the land confirms that fact, somewhat painfully I might add. When using the river bank as a frame of reference it
appears as if I am barely poking along. 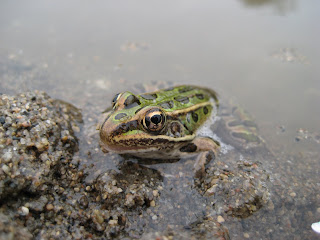 As a rest stop, we took a break at a place we called Frog Island. We make up names for everything as it helps us easily reference them later on. We weren't exactly wracking our brains to come up with the name Frog Island as it was, yes, you guessed it, home to many frogs. In truth Frog Island was a peninsula, but Frog Island had a better ring to it. While I was poking around the small peninsula I found a few odd bits of trash, including a nearly perfectly preserved steel Pepsi can with a ring pull top that is probably 30 years old. Again, being lodged in the clay of the river, no oxygen can get to the can causing it to rust, so it must have recently surfaced as the water level receded. The receding water was only temporary as after we stopped an hour for lunch, there was a noticeable difference in the water level. The river level was on the way up and running harder. 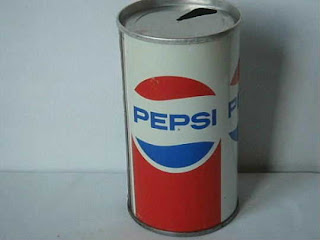 Everything looked greener on the river, most likely due to the rising water as there was no muddy frame around the greenery. Despite the shaky weather I saw a dozen bald eagles. A light rain began falling, which turned heavier and heavier still. I opted to not put on a rain jacket as I would have sweat just as much inside the jacket, soaking me either way. There is a fine line as to whether to put on a rain jacket or not and experience is really the only way to know what to do. The temperature and wind play the biggest roles in the decision.

All we wanted to do was get to the town of Oslo, MN. At one point the town was less than two miles away as the crow flies, but as two goof balls kayak it was still eight and a half! We picked up the pace and started knocking off river miles. At next check the town was four miles away, then two. We were never so happy to see the water tower with the word "Oslo" written across it. We were wet and a touch chilly, but we had made it.

We got our kayaks out of the water, on to the wheels and began our walk to town. As we arrived in town the market was just locking the door. They weren't open the following day, so we were out of luck for taking any food with us when we left. We did however have enough to get by.

It was just a matter of minutes before someone asked us what we were up to with the kayaks. After a brief chat we were invited to a birthday party on a farm a few miles out of town. We figured we should get our tents set up and get out of the rain before we did anything though. There was camping permitted in the town park, which was right near everything. And when I say everything I mean the local bar, as it was the only thing open in town.

As the rain cleared, kids came out and were milling about near our stuff, so we couldn't really leave it unattended. I ran to grab a pizza from the bar to go. The bartender knew immediately that I was one of "those guys kayaking". It was not like I was wearing a shirt that had "kayaker" emblazoned across the front. News travels fast in a small town.

Kobie and I ate our pizza in the park and were still hungry. Sitting outside in the cold wind was rather miserable and with the children having gone inside as it was dark, Kobie and I went over to the bar for another pizza. We weren't in the bar for a minute before we had beers shoved in our hands. Business had picked up in the bar and it was much more crowded than when I stopped in for the first pizza. We met a ton of great people in the bar, several of which asked if we wanted to stay at their house. As we were already set up in our tents, it would have been a hassle, but we certainly appreciated it. One offer we did accept was breakfast with a kindly couple by the names Bud and JoAnne.

While we stayed out later than we probably wanted, we didn't turn into pumpkins. We were able to confirm that over five inches of rain fell south of Oslo, MN which was was causing the rising river level. we never did get that second pizza though.
Posted by Kevin Knieling at 1:42 PM