It was another stormy night. While we learned not to camp under trees with dead branches, I was concerned about live ones coming down with the wind we were having. As a gust of wind would pick up, the pitch of it blowing through the trees grew ever higher. I kept thinking,”OK, that’s it”, but the wind would blow harder still, further increasing the pitch as it wound through the treetops. As in the past though, we were lucky as the rain had cleared by morning, leaving it unusually warm.

I have a routine in the morning that if necessary, I wear my long paddling gloves and a head net, in essence, leaving no part of skin exposed. Being that I had forgotten my head net in Randy’s car, so I had to defend myself as we departed Mosquito Hill in a rush.

It was still completely dark when we set off, but were able to use the moonlight to make sure we didn’t run into anything. In avoiding obstacles it helped, but was no guarantee staying in the middle of the river.

Kobie wasn’t feeling all that great as his back and neck were giving him a little trouble, much as mine had in the first week of the trip. I knew exactly what he was going though as I was in the same situation a few weeks prior. Aside from the fact that it is in general no fun to feel less than 100%, that displeasure is multiplied when physical activity is requited and there are no creature comforts available. 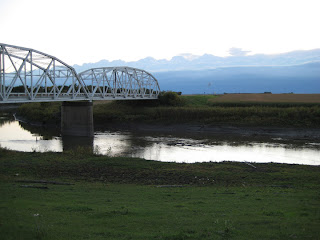 Despite injury and fatigue we were able to slog along, covering 14 miles by the time we stopped for lunch. We may not have had Fargo, ND in our sights, but it was in our heads and we wanted to cover some ground so as to get us there as soon as possible for some well earned and needed rest.

In the afternoon the wind had died completely and I was witness to a curious sight. At first I thought I saw a small beaver swimming across the river, but it turned out to be a brown squirrel. I guess I never really thought about whether squirrel swim as I had never seen one in the act.

We had planned on ending our day at a carry in access point and camping at a county park. It was a disappointment to say the least that not only was there no easy carry in access, but the county park had been leased to the local black powder rifle club and camping was not permitted. Would you really want to with all those rifle blasts? 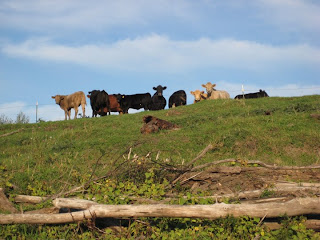 Across the road from the park was a cattle farm. In the segregation of duties of this trip it is my job to secure us permission to camp, so off I went to speak to the farmer. The farmer was pleasant and didn’t mind in the least if we set up our tents behind his tool shed. We would however have to be mindful of a single wire electric fence and may face the periodic bovine. Given the day we had and the terrible time getting the kayaks out of the water, we were grateful to be camping in a cow pasture.

Kobie and I set up our tents and while there was a little noise from the nearby bridge, thought that it was a decent camping spot, albeit a bit exposed. We jumped in our tents to have dinner and just as I was getting out to pass something to Kobie, a storm came out of nowhere. Ten minutes prior there was a clear sky to the point where Kobie and I talked about photographing the sunset.

The wind blew and it blew hard. The end of my tent pitched to the wind was buckling under the strain. While the tent was firmly staked down, the tent was still making a noise akin to a flag snapping in a brisk breeze. As it hadn’t started raining, Kobie thought it might be a good idea to move the tents. While I really didn’t want to get out and move, it was probably the smarter idea, but it was all precluded by rain.

While we probably would have lasted the night out there, we wouldn’t have gotten any sleep whatsoever, so again I was at bat. The farmer was moving his car in the garage, so I asked if we could pitch nearer his house, using an outbuilding as a wind break. He did us one better by giving us the go ahead of staying in the barn.

We had to run back and forth with our gear, shuttling it from the tents to the barn until we could get the tents down, each time dodging the electric fence in the dark. When we finally got all our gear in the barn, we paused as if out of a movie with the actors wringing wet having come out of a storm.

We set up the mesh screen from one of the tents to keep the mosquitos off and shared that for the night. We were also sharing the barn with a black cat, which to us was not a bad sign but rahter a good one. We figured it would keep the mice or rats away. Again, we were grateful for our campsite.

I had woken up several times during the night as usual and was able to see out the barn as there was no door on the front of it. The first time I woke up it was still overcast and raining, but when I woke up later, I looked up and saw a sky full of stars. I sighed and feel into a deep slumber.
Posted by Kevin Knieling at 4:14 PM