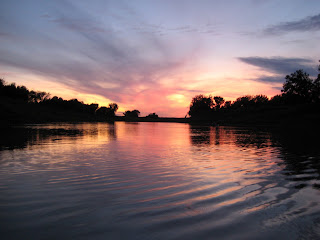 The Grotto, as we dubbed our campsite was so quiet throughout the night and was in general a great place to camp. The only drawback to the campsite was that it was overrun by slugs. The slugs set up shop on and under our tents, complete with slime trails. The biggest pain was that the slugs were small, about the size of a thumbnail, which made flicking them off our gear nearly impossible. We did the best we could clearing the slugs, but took a few along for the ride.

We set off paddling and I felt good about the day. The river seemed to be running against us a little harder and the wind was trying to nudge us backwards but I really didn't mind.

The wildlife was active in the morning. I got the best view of a beaver I have ever had when one decided to splash into the river right next to me. The beaver was the size of a Labrador and did a fantastic belly flop.

Fish were rising to the surface all around us. I had a fish leap out of the water and hit the back of my kayak, but Kobie did me one better. As Kobie and I were chatting, a fish of about two foot in size leaped out of the water and nearly into his lap. It hit the deck of his boat, and like a basketball hanging on the rim, could have fallen either way. The fish probably knew what was best for it and flipped itself back in the water.

As we paddled upriver we got a fly-by from a border control helicopter. I could hear the thing coming long before I saw it. The helicopter was at an altitude that just barely cleared the treetops. Kobie gave a wave and received one in return, so we figured we were OK. I wouldn't be surprised if they radioed the border post and checked as to whether we came through the immigration checkpoint.

We planned on camping that night at a place called Catfish Haven that was shown on my map, so we felt good about where we would be spending the night. Kobie was slightly ahead of me and I anticipated that he would see the boat ramp, get out and when I rounded the bend he would be standing there stretching his legs. Instead, I paddled past where my map indicated Catfish Haven should have been but saw nothing remotely like a boat ramp, campground or otherwise. Hmmm. I caught up with Kobie and we paddled together a little further, but still, no Catfish Haven. After several miles, we reluctantly gave up the thought that as we rounded the next bend, there would be the campsite (See, I told you that after the current bend there would just be another one). This threw in to doubt any and all other things that appeared on the map.

Light was slowly fading and there weren't many places along the river that looked even remotely possible to set a tent upon. That was if we were even able to get up the steep banks. We had a hard day and the last thing I was interested in doing was hunting around for a campsite. With no other choice, we poked along the river banks looking for a suitable place to set up shop for the evening. After covering a couple of miles in our search we realized that it was only four additional miles to the river town of Drayton, ND. Despite the new doubt in our map, we firmly believed that the boat ramp indicated on the near side of Drayton Dam would not be fictitious, so inspired by a sunset draped in reddish hues, we paddled on.

It was now nighttime and the moon only had a little light to offer us on our seemingly endless session on the river. We were able to use the glinting moonlight on the moving water to guide ourselves. Fortunately there was little in the way of logs, large branches or other obstacles in the water. While it had been somewhat masochistic paddling up stream, we knew that we would wind up at the base of the dam as opposed to the top of it. The joke between Kobie and I was. "When you see a wall of water in front of you, thats the dam. Make a right".

We eventually did see that wall of water and there was a fairly large pool in front of it that had more in the way of moving water than any other place on the river than we had encountered. We bobbed up and down as we decided what to do. We hadn't seen a single person the entire day and now that we wanted to get off the river and camp, there were a bunch of kids partying at the boat ramp. As we didn't want to get involved with that scene, we ducked off the river as an opportunity presented itself prior to the boat ramp. There was a very limited area in which to camp which basically put us in patches of tall grass at at the end of dirt road. I must have misunderstood Kobie's description of the potential campsite as I thought he wanted to set up the tents on the road, a project I didn't care to participate in. I think it was the first time in the trip where Kobie was a bit annoyed at me. I should have known better, but as it was a long day and we were both shot, it turned out to just be a misunderstanding. We had a couple of cold cans of soup and were done for the night.
Posted by Kevin Knieling at 5:57 PM