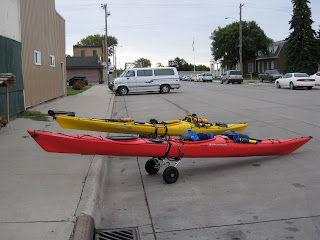 I had one last hot shower before setting off for the day. As I never know when the next shower will be, I take full advantage of showers, especially hot ones. As Kobie and I strolled back to the boat ramp, we stopped at the hardware store to pick up an allen key to fix Kobie's rudder. As we had parked our kayaks out front we drew a little attention and ended up spending a good 15 minutes chatting with people. Having two kayaks in tow is a surefire conversation starter. And I was also told that a puppy worked best when trying to meet girls. Just when we thought we had free passage, a woman came running after us and explained that if we were heading to the boat ramp we could drive down there. She seemed so kind and genuine that I hardly had it in me tell her that no, we couldn't. She thanked us for visiting town and with a friendly wave sent us on our way.

The sun was intermittently poking through the clouds, but the day was mostly overcast. The temperature has been reasonable for the most part. During the day it is warm enough to get away with short sleeves, but it cools down at night where long pants and a jacket are in order. It makes for a rough wake up call crawling out of my sleeping bag in the morning, worse if it is still dark.

As Kobie and I paddled along in Canada we kept saying, "things will be different when we hit the United States". I don't know why we thought that, perhaps because we had actual paper maps of the river, showing river miles, but in truth little was changed. The river was running
a bit harder and the mud along the shores had relented to some degree, but it would be premature to say the "gumbo" had ended. The one major change since crossing the border, and I found this odd, is that no one, I mean no one, finished their sentences with "eh". It seemed as if everyone had to leave that expression at the border check point. I find it just like New York, except backwards. In Canada someone might say "You stepped on my foot, eh.", whereas in New York you just turn it around to "Hey, you stepped on my foot."

We had been seeing many dead fish floating on the river, presumably from previous warming of the river water, removing much of the oxygen. It happens to trout in the summer as water warms up. At least I hoped thats what it was, not some more sinister reason that could affect us as well. For some reason Kobie and I decided to count how many dead fish were doing the backstroke. By early afternoon we were in the neighborhood of 160 before growing bored of counting. Most of the fish were Channel Catfish, but there were also Carp as well as other indeterminate species; indeterminate due either to ignorance or its state of decomposition.

We had some indecision as where to stop for the day. We didn't find anyplace that was spectacular, so we rounded the next bend and then the next and so on. It is tough to stop paddling as there is always the possibility that a great little campsite is around the very next turn. I have to say though, it has never been the case that the following morning after camping we would have found some awesome campsite had we paddled another couple of miles. 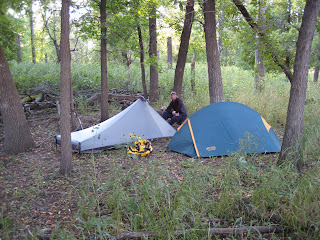 We settled on a place that had a somewhat steep but only partially muddy bank. Once over the bank though, there was a splendid little grotto. It wasn't the grotto at the Playboy mansion, but it was all we needed for the night. The trees provided protection from the wind, the ground was level and the area of trees was a welcome change to looking at the muddy banks of the Red River all day. Kobie and I wondered about the presence of bears in the area, but we hadn't seen any evidence of bears since leaving Winnipeg, so figured we were safe. As I was looking at the back of my map before going to sleep though, there was a description of wildlife in the area which included the periodic Black Bear or Mountain Lion. Excellent. Thats a great thought to try and fall asleep to.
Posted by Kevin Knieling at 9:05 PM