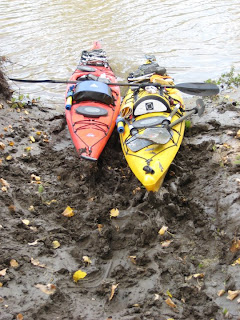 Kobie and I arose before sunrise to try and evacuate before the mosquitos attacked, but it was to no avail. The mosquitos picked up right where they left off, driving us back on the river without breakfast. All of our gear was hastily thrown in our kayaks and we made a break for it in a less than eloquent manner. We slid our kayaks down the bank, jumped in and paddled off with a trail of mosquitos in tow.

It was evident that is was going to be a warm day as I began to sweat within minutes of setting off. I was however covered from head to toe in fleece clothing to keep the mosquitos at bay, but that all came off in short order. While we sat in our kayaks on the river disrobing we also had a bit of breakfast.

It was a relatively uneventful morning, but as I learned in my travels, it is usually those hum-drum sort of days where something colossal happens to break the monotony. In truth I was quite happy for the monotony as long as it meant there was no wind, which turned out to be the case. There wasn't a cloud in the sky and it warmed up to the mid-80's. It was the warmest day since leaving Winnipeg, or at least that is what the amount of perspiration on my brow was telling me.

We have been seeing quite a few beaver splashing into the river as we paddled near, but haven't really gotten a good look at any until today. For some unknown reason there were an inordinate number of beaver out and about. The best look we got was when a family of three beaver casually made their way from the bank into the water, seemingly uninterested in what we were doing.

With the drop in the river level and the weaker current we were able to average a speed of just under three Miles Per Hour. While we were grateful for the slow moving river, it gave us some concern about the Bois de Sioux, the river which we will need to paddle following the Red. The Bois de Sioux is small on any map I had seen and if the Red River is dropping, the Bios de Sioux may but nothing more than a muddy hiking path for us. 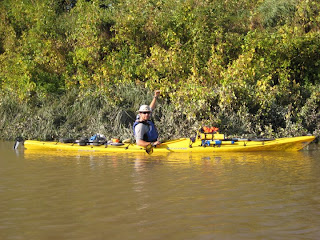 We had a planned stop for the day at a campground that was listed on my map. Georgia, our friend from last night, confirmed that it was still there, so we weren’t going to have a repeat of the night we had to push on to Drayton Dam.

At the spot my map had designated there was a boat ramp as planned. It was however, completely covered in about five inches of mud. We paddled past the ramp thinking there might be another way to get up to the park, but we were out of luck. As we turned around and paddled down the river to the boat ramp, Kobie clocked his speed at over six Miles Per Hour and that was with an easy current. We reveled in the thought of what the Mississippi River might bring.

Back at the mud covered boat ramp I got a solid start and ran my kayak up the ramp as far as I could, only to slide back down into the river. Kobie found the best way to get up was to exit his kayak in the water, fasten a rope to his kayak, navigate the ramp and once on dry ground above the boat ramp, pull the kayak up.

Our home for the night was Belmont Park at Frog Point, ND, just down the rode from Climax, MN, and surprisingly not an Amish town like Intercourse, PA. It wasn't long before we had a few visitors. We kind of stick out with kayaks in tow and as an article about us appeared in the paper this morning, people were wise to us.

We had the pleasure of meeting Ron, the County Commissioner and also the supervisor of the campsite. He told us that we could find a marking on a tree designating the high water mark from the flood of 1997. He mentioned that the river was about 18 feet higher than its current level and that last week the water was six or eight feet higher than it was now. We also met two fantastic people, Wayne and Sharon who have traveled to some degree and enjoyed getting away from home by coming out to the campground on the weekends.

After getting set up I grabbed Kobie’s computer and tried to catch up on some writing. I was interrupted several times by some drunken yahoos that at one point came over rattling a woodsman’s axe and making various comments about me, which I ignored. If that is that worst of what I have to put up with in some of the campgrounds I will consider myself lucky.

In the evening Wayne and Sharon invited us to their camper for some barbecue. While barbecued chicken was a big draw and certainly better than what Kobie and I had planned for dinner, it was great to talk to people interested in our travels and that really enjoyed the outdoors.
Posted by Kevin Knieling at 11:30 AM