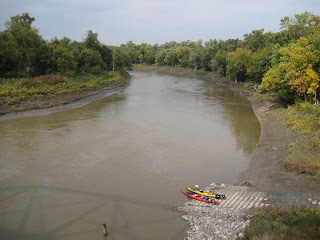 To continue along the same vein as the previous night had ended, I was woken at some indiscriminate hour by what I can only guess was a turkey ambling around our campsite, clucking away. Rounding out the theme of the campsite we had chosen I was able to smell a skunk just outside my tent. Kobie and I would dub the campsite, quite aptly I believe, “The Zoo”.

Kobie and I had planned another 5:30 wake up call hoping to beat at least a few mosquitos to the punch, but it was to no avail. As I rushed to take down my tent in the dark I thought, "Were a mosquito looking for an honest job, I would hire him in an instant. They are persistent as all get out, they work well alone or in groups and they, much to my dismay, work all hours of the day or night". I would even let them wear khakis and leave the tie at home on Fridays.

Once getting out on the river and leaving the campsite behind, it was a perfect morning: there was but a light current, zero wind, cool temperature, I saw about a dozen deer in the first hour and best of all I was kayaking to the Gulf of Mexico. That hour before the sun crests the top of the tree line is my favorite time to paddle. I also enjoy the evenings, but along with the evening comes the hunt for a place to camp.

We knocked off 12 miles by 12 noon, due mostly to our early departure. Conditions were perfect in the morning and I was in an all around good mood. It was another one of those days that I was thrilled to be out on the water; at least in the morning anyway.

The afternoon was a much different affair. It all started with me losing one of my water shoes off the back deck of my kayak after leaving our lunch spot. Kobie pointed it out before we made in any distance, so I went back to have a look, but it was claimed by the Red River, perhaps to be found by a couple of kayakers in another 50 years. Not that I was going to wear one shoe, but to add insult to injury I lost the good shoe, instead of the one with a hole in it.

The switch for the wind had been turned on and as usual the knob was turned to high…in our direction. I was able to clearly see the wind pushing across the water, leaving ripples in its wake. I was able to prepare for the gusts as there was no mistaking them coming up the river. The change in wind turned a fantastic morning into a rough afternoon.
We pulled up the boat ramp in the town of Halstad, MN and while my map showed that camping near the boat ramp was permitted, a sign indicated otherwise. While Kobie watched our gear, I ran into town to see what was going on. I asked a couple of people in town about the camping situation and the common thought was that it would probably be OK; no one would give us a hard time. 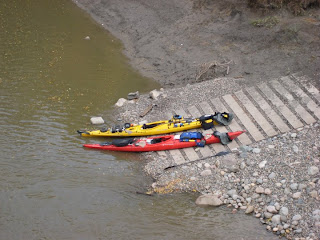 Just after getting back to the boat ramp a gentleman by the name of Randy stopped by. After speaking to Randy for a bit he offered to take me on the back of his ATV to check out another possible campsite a little ways off. While the other campsite didn’t pan out, Randy, being a lover of the outdoors knew some of what we were going through. With that Randy inquired as to what we wanted as he would get it for us. A short time later, Randy returned with some ice cream for Kobie and me. He also returned with his wife, an extra car and an invitation to use their shower and soak in their hot tub. If I were able to choose anything within reasonable possibility along the river after several days of paddling, a hot tub would certainly near the top of the list. I said that I would be there.

As Kobie and were getting setup, there was a guy milling about, inching closer and closer eyeing down our stuff. It was just one of those situations that made us feel uncomfortable. We ended up talking with the guy and he was probably harmless, but again, we weren’t feeling it. I had a good laugh when we were talking about Fargo and he suggested that we put the kayaks on the bicycle racks of the bus to get to a motel. It's not like we were describing the kayaks to someone and they couldn't guage how long 17 feet is. The guy had actually seen them. I guess it just didn’t occur to him that the kayak would stick out four feet on each side of the bus.

In any event, it’s not like we have much of value, but it would be a bummer if any of our stuff walked off. With that we didn’t want to leave our things along, much less only have one of us there after dark. I said I would stop by Randy’s, so, off course, I had to go. And while I was there, I figured I might take that shower he offered. I would have loved to jump in the hot tub, but I didn’t want to leave Kobie by himself. It was difficult to leave as they were so nice and we started looking at photos from the 97 flood, but they gave me those go along with some homemade cookies and drove off in the car they lent us. I couldn’t believe it.
Posted by Kevin Knieling at 2:48 PM