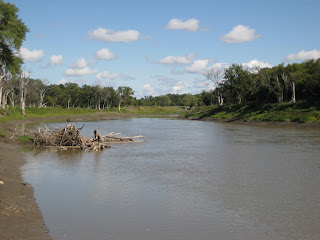 Despite having a place to easily get back on the river, we started late, somewhere around 10. I think we were taking advantage of the civilized surroundings. When we finally did get underway we were thrown right to the wolves as there was an area where the river turned and narrowed, causing the current to pick up significantly. When I looked at the river bank I was barely making progress as the current tried to push my kayak sideways. We made our way through unscathed, but it was the toughest section of the river so far.

The morning was rather uneventful as it was along a meandering section of river with steep muddy banks; so the same as the last 80 miles. One thing that broke the day up was a pelican sighting. Three pelicans were on the river and once we paddled too close for their comfort, they took flight away from us, only to make a U-turn and give us a fly-by directly overhead.

In the afternoon I felt the call of nature and with no place to beach my kayak figured I would pull up next to and big old turned over tree stump, which looked much like a Baobab tree. Standing in a kayak is not really recommended, but I figured, "What the heck, I can hold on to the tree stump for balance". What I didn't anticipate though was that the stump wasn't secure and as I set my foot on it, the stump rolled over, sending me in the drink. As I righted my kayak and was pumping water out of it (amidst Kobie's laughter mind you), I thought that it was actually a good thing. I am sure it won't be the last time I get dumped from my kayak on this trip and probably under more dire circumstances. I did all the right things after being dumped, so I actually take it as a somewhat embarrassing positive experience. As I got back in my kayak, Kobie, in a manner of speaking that only someone from the Commonwealth could muster, said something along the lines of, "Mate, I am sure that in the literature that you got with the kayak, somewhere in there it mentions that you shouldn't be standing in the thing." Touche'. Thats what I get for trying to stay well hydrated.

In the evening as Kobie rounded a bend in front of me, he shouted, "boat ramp", adding "and there is a canoe on it". Boat ramps are a pretty insignificant thing in most peoples lives, but for Kobie and I they are better than gold. They are a way of getting off the river without having to wade through knee high mud, dredging our kayaks behind us.

I thought it was a joke, but like a mirage in the desert, we found what we hoped would be our way off the river that night. It was my turn to check things out, but as I walked along the path leading away from the river, there was a smattering of "No Trespassing" signs. We have to respect private property, so we paddled on.

It was only a few miles to a bridge, which sometimes allows for an easy exit from the water and we hoped this bridge would provide easy egress. When we approached the bridge, it didn't look at all like a place we would want to get out of the river as there were many large rocks over which we would need to carry our kayaks. And that was only after we would have to trudge through the mud . There was another little wrinkle to the plot as under the bridge there were rapids. It wasn't like the fast water we had paddled through, but actual rapids where the river elevation changed by a couple of feet. There was no way we were paddling up that, so we exercised our only other option, negotiating the mud and rocks.

I scouted the area and knocked on several doors seeking permission to camp, but no one seemed to be at home. Across the bridge were open fields ,which we would later learn was an Indian Reservation and not someplace we are supposed to be camping.

We got our kayaks up and out of the water on to the road and as luck would have it a car pulled in the driveway of one of the homes. We got an OK to camp, but then had the pleasure of meeting the rest of the family from across the street. The permission to camp turned to, you could sleep in the machine shed, to, you could sleep in the basement, to, you can stay in the guest room.

Apparently the Houles had taken in paddlers before. I imagine that at the rapids, paddlers exit the river looking for a place to camp and all end up knocking on one of the doors at the Houle's farm. In any event we were treated to a few frosty beers and some good conversation. I always enjoy getting a local perspective to the places I visit.

Take a minute to think what you would do if two random wet and dirty strangers came to your door looking for a place to camp. Obviously, Kobie and I have nothing but the best intentions and wholeheartedly appreciate any assistance we receive along the way, but how do people know that is in fact the case? I guess it is all about judging people in short order. When I traveled in the Middle East I had to make judgment calls every day as to friend or foe. Among other things, I was offered numerous rides from people who by all accounts in western media should have fallen in the foe category, but that is one of the most positive aspects about traveling, being able to judge for myself. The media paints a picture that suits their own interest, whether it is selling ad space or otherwise, but the point remains, take what you see and hear with a grain of salt and trust your own judgment.

Posted by Kevin Knieling at 6:12 PM