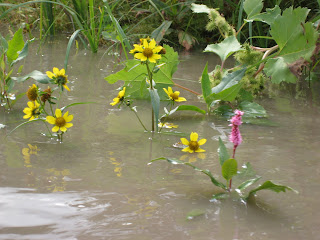 It was a windy, rainy night, which meant little sleep. It also took us somewhat longer to get ourselves packed up than normal, so we were a bit late for our breakfast appointment. Bud and Joanne were waiting for us and put on a massive feed. They used to have five children living at home, Joanne mentioned that she is used to cooking.

It was great speaking to the couple as they had so many good stories to tell. In this day and ae we have so many ways to document things, but unfortunately, so many stories will die with the people who lived them. Among other stories, Bud mentioned that there was no electricity on the farm upon which he grew up until 1949. Let me repeat that, no electricity. Kids today can't even relate to being without the internet for a day, much less without harnessed electricity. Breakfast was more than I could have hoped for, but eventually Kobie and I had to tear ourselves away to get back to paddling the swollen river. We here however sent off with a doggie bag. Thank you so much Bud & Joanne.

The river looked significantly different from the previous day. The water level had risen over another foot and many plants were under water. There was also a significant amount of debris floating down river past us. The changed river made for a more difficult morning in that the water was running harder against us, but also that we had to dodge the debris coming down river.

We did catch a break as the wind was blowing at our back. In the afternoon the wind picked up and assisted in shoving us along. On a long straight section of the river the wind was kicking up waves running in our direction. Kobie and I were actually able to surf the one footers for several hundred yards before they lost momentum and our kayaks slowed to a near stop. The waves mixed things up and certainly made for a fun half hour on the river.

Camping, as usual, was on a steep muddy bank. I was asleep by nine and woke up to a noise outside. I was hoping I had slept most of the night through, but it was eleven. A skunk wandered through our camp to check things out. I was happy in the fact that he didn't stick around very long.

I generally have a fair bit of concern for our kayaks overnight. If for no other reason than they are our form of transportation. I tend to sleep better though when we are able to get our kayaks up right next to our tents. Some nights it just isn't possible to get the kayaks up the bank of the river, so we have to leave them tied up just off the river unattended. The area we have been paddling in has been so desolate that there shouldn't be that much concern, but I am from New York City, While not a misanthrope, I do firmly believe in taking care of my possessions.
Posted by Kevin Knieling at 2:12 PM