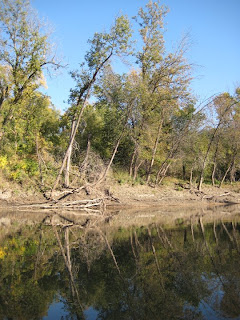 I didn't think it would really be possible to get such a goods nights sleep in a tent as close to a city with an effective population of 130,000 between Fargo, ND / Moorhead, MN. It could be that I knew I would be in a motel by the end of the day so I wasn't in the least bit stressed out. 5:30 did however come around rather quickly. It was anther morning setting out as it was just light enough to make out where we were going.

The morning was overcast and there were huge bolts of lightning in the distance. We weren’t all that concerned as the lightening was far enough away and we didn’t have far to go. We took it easy in the morning as we knew it would be a short day. There were a few odd smells along the river that changed quickly. The scent of freshly baked cookies would give way to burning corn to laundry detergent.

It was obvious that we were nearing Fargo proper as the muddy banks gave way to concrete banks and flood control walls.

When we got to Fargo, ND / Moorhead, MN we had the first of the three city dams to deal with. In checking the map, in bold letters it stated: NO IDENTIFIED PORTAGE. It turned out not to be so bad as there was a new narrow concrete ramp just before the dam. Getting back in the river was also easier than I thought it might be as we were able to jump right in.

Paddling in the controlled water environment was fantastic. There was little current and no cross-currents of any kind. We were zipping along at four miles per hour without out pushing it. It felt as if I was paddling in air.

If portaging the first dam was easy, the second was a non event. There was a boat ramp on each side of the river. What more could we ask for? As we were portaging we also met up with a local TV station, WDAY who put together snippet that I can’t seem to find on-line.

We were going to leave the third dam for the next day and get off the river in Lindenwood Park, which had carry in access. The real trick was going to be finding a motel that could house both us as well as our kayaks in some way.

As we walked along, not a few hundred yards from the park we met Maureen, a Fargo local. After speaking for a few minutes she offered her yard as storage space until we were going to set back out on the river. Not only that, but she then gave us a lift to a motel, twice. Once when we were sussing out our options and then again as we returned for some of our gear. Unbelievable. The kindness of the people we met on the trip is unprecedented. Thank you everyone.
Posted by Kevin Knieling at 9:10 PM