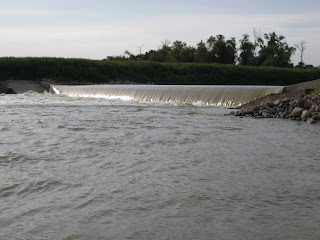 I was feeling rather spry given the previous days paddle, which may have been in part to a hefty dose of ibuprofen before turning in. When I got out of my tent and saw Drayton Dam, I was less than impressed at its stature, but had I been coming the other direction I wouldn't have wanted to go over it in a fully loaded touring kayak.

As we had a rough day previous, Kobie and I decided to make it a short day and just loop around the other side of town on the river and call that our day paddling. It was with very little difficulty that we were able to get our kayaks around the dam and back in the river. Mother nature not wanting us to get away with an easy day, decided to turn on the wind machine. It was only a five mile paddle, but each of those five miles was hard earned.

The most important thing I had learned during the day came when paddling just above the dam. Were we paddling with the current, it would have been nearly impossible for us to see that we would be going over the falls until we were just about on top of the dam, at which point it would be too late. Not only that, but there was nary a warning sign that there was a dam just around the corner. I would hate to be surprised by that one. It was a really good wake up call to us to keep our eyes peeled when we are paddling in the direction of the rivers further south. We had a map that allegedly denoted all the dams, but we found out with Catfish Haven just how reliable that map could be.

We contemplated checking into one of the two motels in town, but not too surprisingly the nicer one was full. At that point we figured pitching a tent in the town park would be just as pleasant and significantly cheaper than the lesser motel.

On our walk into town we stopped at the grocery store to get one of our chores out of the way, but before we even got in the store someone had struck up a conversation. One conversation turned into two, which then turned to three ending with an invitation to lunch at the senior center by a gentleman named Ron. We also met Larry in front of the grocery store, who runs the newspaper in the area. We would catch up with Larry later.

Lunch was a pleasant affair and I had the opportunity to meet some wonderfully kind people. I also learned so much about the area. It was explained that in the spring, water runs nearly up to the main street, a rise of about 30 feet from where the river currently ran. I always enjoy a good conversation with some local folks about an area which I am passing through. I also learned that there was a mountain lion that had been skulking about the area through which we had just come. At least we were already past there. The most interesting nugget of information that I garnered though was that Catfish Haven has long since been washed away by a flood. Nice that the map produced nearly ten years later still had it listed.

Following lunch we managed to pick up those groceries and wheeled our kayaks into the town park. The campsite was nicely sandwiched in between a highway and railroad tracks. As that wasn't really noisy enough there was also a dog that seemed to enjoy barking.

We spent the afternoon planning the details of our push south and watching a some TV shows on Kobie's laptop. The evening found us at a small diner called "Andys", where it seemed like the whole town congregated for dinner. I guess the two for one burgers were the big draw. It worked for us. We finished off with some ice cream and went back to the campground where we tried to fall asleep to the lulling sounds of traffic and the periodic train horn.