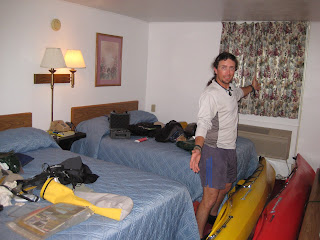 We began paddling at first light in an effort to get to town as soon as possible. On days we know we will end up in town, we try to arrive as early in the day as possible. It really is nice to have that half day in town to start sorting out laundry, resupplying, and doing other things, such as eating on a table as opposed to on a rotted out tree trunk. I also generally enjoy having access to the other things I have voluntarily given up which man has worked thousands of years to earn.

The closer we get to a town the more our chatter seems to drift towards us being in the town. Conversation grows more concentrated on the things we want to do in town or what we are hoping the town might have. When we have four days to the next town there is the casual mention that perhaps it would be nice to get away from the mosquitos and have a shower. By the day before arriving in town we describe in vivid detail what we are going to do, going to eat and most of the time have our menu choices carefully planned out. Not every town has our restaurant of choice and that can at times lead to disappointment, but it doesn't last long as we are just happy to be in civilization .

Surprisingly, the river ran in near straight line into the city of Grand Forks. Of course my use of "straight line" is relative as there were numerous bends, but we did cover much more distance heading south than on any other day paddling a similar number of river miles.

Before arriving in the city of Grand Forks, ND Kobie and I had to portage around a dam. While getting out was straightforward, getting back in involved some bushwhacking. The best part of it all was that it was being captured by the local TV station, WDAZ. They threw together a little snippet about the trip, which can be found here.

When arriving in East Grand Forks, Kobie and I weren't sure what to expect, but were told that there was an outfitter in town where we might be able to pick up a few things that we needed. The bigger problem was what to do with kayaks if we were going to stay in a motel.

We were able to tackle the kayak issue with the assistance of a very friendly hotel manager at the Plaza Motel in east Grand Forks. He didn't seem to mind if we went ahead and brought the kayaks right in our room.

As our kayaks were filthy we sat out on the sidewalk of the main road though east Grand Forks and washed our kayaks. We did get a fair number of looks from passers by. The real trick was to actually et the kayaks in the room. I could tell without the use of a measuring tape that the room was exactly 17 feet long, as my kayak went from wall to wall with only millimeters to spare. It didn't make it easy to navigate around the room as we constantly had to step over our kayaks, but at least I knew they were safe.
Posted by Kevin Knieling at 2:32 PM