A Cold Day of Dams, or a Damn Cold Day 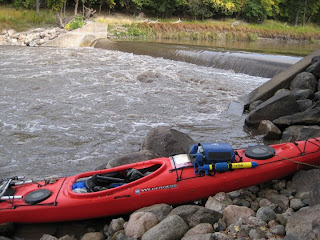 It was a chilly morning with the mercury hovering in the low 40’s. Despite the morning being clear and crisp, I still really didn’t want to get out of my nice warm sleeping bag. One of the things I dread the most in the morning is the actual act of getting the kayaks back in the water and then getting myself in the kayak. This morning though the kayaks slid right in and I was able to use a stone as a step to get in the kayak without so much as getting my feet wet.

It was an early start and while I wasn’t a fan of crawling out of my sleeping bag, I just love being on the water before the sun rises above the trees. There is almost always wildlife to be spotted and this morning was no different. As it was just getting light I saw the silhouette of two deer (one a pretty nice six point) on the bank with nothing but the sky behind them. Aside from deer, the other usual suspects were up early, including: heron, hawks and beaver.

The river seemed to hardly be flowing. It was almost like paddling on a lake. While that was enjoyable as we were able to make some time, the morning was slow to warm up. It was only as we were approaching Hickson Dam near lunchtime that I removed my paddle jacket. It became evident that we were nearing the dam as there were bubbles riding the surface of the water, having been created as the river flowed over the dam.

I had some concerns about having to portage around the dam as the map read, “NO IDENTIFIED PORTAGE”, written exactly as such. While the capital letters made me nervous, getting up out of the river was no worse than when we had to go around the rapids under the bridge in Canada. While we were going around the dam, we figured that we were already out of the water so we might as well have some lunch. I was forced to once again don all my cold weather gear as we sat and ate.

There was more wildlife to be spotted in the afternoon, highlighted by a rafter of turkey flying across the river. Why does a turkey cross the river? To roost on the other side, of course. 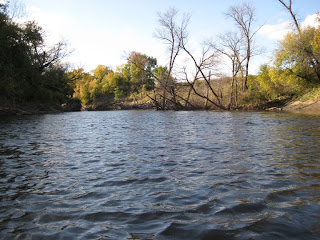 As the day wore on there seemed to be more river blockages than in the past. For the most part the blockages, consisting mainly of trees, weren’t an issue other than causing a bit of fast water. I grumbled about one section of river as I thought a downed tree went clear across the river, which would have forced us to find some way around. We were able to snake our way through the log jam.

In the early evening we approached our second dam of the day, Christine Dam. My map again gave no indication as to a possible portage again in capital letters. I didn’t think much of it as the previous portage wasn’t bad other than a bit steep on the way back in. Our options were significantly limited in this instance though. It would involve carrying the kayaks up a collection of boulders; swing it around some trees and then the person in the back walk on the dam to get the kayaks up the last little hill.

By the time the kayaks were up and out of the water we were ready to be done for the day. Again, we were already out of the water, so we figured we would use it to our advantage. The only wrinkle to our plan was a bevy of “No Trespassing” signs posted to number of trees. As luck would have it, a name was displayed on the signs, so in one of the rare instances where I had cell phone service, I called information and got the property owners number and gave him a ring. He wasn’t home, or at least not answering his phone.

As that didn’t pan out, I decided to run over to a house about a half mile away and check with them. I have to admit that I have really have had some really good luck when it comes time to ask for permission to camp on private land as they always seem to be o 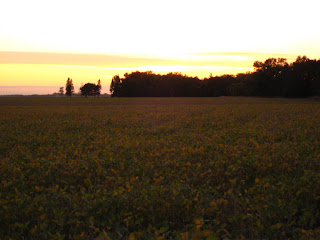 utside, or just coming home. The case fell into the latter category. At first I got the usual guarded look of “what are you doing on my property and what do you want”. It generally only takes a few seconds to explain what we are doing and then I usually get a barrage of questions. Once the questions are fully answered the conversation closes with, “no problem”. Thankfully, this time was no different.

I was rather amped as we had a nearly perfect camping spot on private property (I am not a fan of camping in city parks) and a subdued, but reddish sunset over the soybean fields. I fell asleep to the sound of the Red River rushing over Christine Dam.
Posted by Kevin Knieling at 9:51 PM