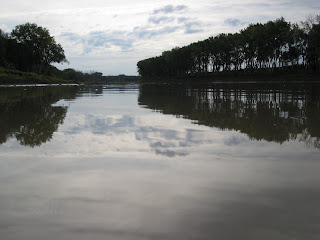 Waking up in the morning it felt awfully chilly, hovering right around 40 degrees. We did at least have an easy time getting out of Morris, MB as we figured out the best way to negotiate the ramshackle boat ramp. On the down side, we had to battle the wind again. Oh, and just to make it more fun, there was intermittent drizzle.

Throughout the morning there were more than a few Bald Eagles about. Despite being the national bird of the United States, I had seen more in one day in Canada than I had ever seen in the US. Perhaps the eagles feared being drafted into the US military and fled to Canada.

I had been having some troubles with my kayak as it has the tendency to track to the left as opposed to perfectly straight. I rearranged some of the gear stowed in my kayak and it somewhat alleviated the tendency to wander, but it is frustrating when the thing decides to make a left turn. I was initially envious of Kobie's kayak as he has a rudder on his, but I am learning the idiosyncrasies of my boat. In a heavy crosswind though, Kobie will fare much better than I, no doubt.

Healthwise, I am feeling rather decent. Sure, the arms and shoulders are a bit sore, but that was to be expected. One of the herniated disks in my neck has been giving me some trouble, but I have been dealing with it for fifteen years, so it's nothing new. My back is holding up quite well as the seat in the kayak is highly adjustable.

We are not setting any kayaking distance records as we are trying to build up the necessary muscles in all the right places before putting in bigger mile days. When we have the current running in our direction that will add on some miles as well. At that point, at least in theory, we could sit in our kayaks eating lunch and still make progress.

As we paddled along we hadn't seen anyplace to camp for a stretch of over ten miles, so we figured the pickings would be slim for the next few days. We have river maps for the Red River starting at the US border, but in Canada it doesn't help us much. Our main navigation tool is Kobie's little GPS unit. We have to be opportunistic about where we end the day even if we don't put in the number of miles we wanted to, solely because of the lack of places to get off the river.

In the afternoon, Kobie's GPS showed a campsite somewhat inland. As we passed the area the GPS designated as a campsite all that we saw was a dense cluttering of trees. We had given up hope and paddled on. As we rounded the bend though, there was a boat ramp. It wasn't a Morris, MB boat ramp either mind you, but a perfectly constructed ramp where we didn't even need to get our feet wet. As it was raining, the rest of us got wet though. So in a light rain, Kobie went up to check out what was at the end of the boat ramp. Sure enough, there was a fully developed campsite with bathrooms, running water, electricity and a large covered gazebo under which we could spend our evening. Normally with an evening rain, all we can do is retreat to our tents and spend the entire evening there.

We got off the river and wheeled our kayaks the half mile or so to the campground where we were the sole inhabitants. As Kobie did some reconnaissance he came back bearing the news of showers...hot showers. At first I thought he was joking, but he would not kid about a hot shower. It was glorious. Despite sleeping on the ground in a tent on a rainy night, I felt civilized once again.

Posted by Kevin Knieling at 5:24 PM