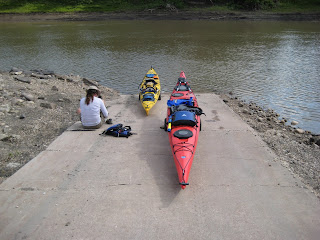 Kobie and I were up at 6:30; late by farm standards, but we weren't going to paddle before sun up. We weren't even able to say goodbye to our kind hosts as everyone was already up and out on the farm. It took us a bit to get our boats back down the rocky bank on to the other side of the rapids, but eventually we prevailed. Kobie didn't have the best morning as he lost his paddling gloves and a screw from his rudder, rendering it useless. He muddled on though.

We didn't have a particularly long or difficult day planned as we allocated a significant amount of time to get across the border into the United States. We took it easy and had the usual wildlife sightings of Blue Herons, beaver, Bald Eagles, Canadian Geese and numerous fish rising to feed on the surface.

Just before crossing into the United States on the river there was a boat ramp. Kobie and I pulled off the river so that I could scout our route across the border. I walked along an embankment for about a half a mile and caught the attention of a Canadian border control agent. After I explained our intentions, he radioed the US border control post and we were told to go grab our stuff and head on over. I ran back down to the river to collect Kobie and our kayaks. We dragged our gear to the Canadian border post and was told that we could leave our things there and even come back to Canada to get back in the river where we got out, as there was no reasonable place to enter or exit the water on the US side.

Kobie and I walked across the road to he southbound lane of traffic and took our place behind a car in the immigration line. I was laughing the whole time as we must have looked rather peculiar, standing in the road wearing our PFD's waiting to cross the border. Despite being told to use the car lane, we opted to walk in the building that is used by bus passengers. No one paid the least bit of mind to us for well over five minutes, which I didn't think bode well for us. I was just going to my home country, but Kobie already got a hassle when he flew over from Singapore to Minneapolis, before taking the bus to Winnipeg.

An officer eventually asked if he could help us and as it turned out, was one of the agents I spoke to when I called the border post to find out what we would need to do. We got a couple of the usual questions a border control agent would ask as well as a few specifically about out intended trip. One of the officers had worked in Iowa for the Coast Guard and mentioned to us that the Mississippi was running particularly hard this year, a bonus for us as we would be traveling with the current.

The officers inquired to the whereabouts of our kayaks, which we left on the Canadian side of the border so as to not have to lug them along. They didn't seem to be bothered, wished a safe journey and said that it would be fine to go back to Canada to get back on the river. Other than having to stop at the Canadian border control post going north and explain what happened, we were back to the river.

As we got back to to the boat ramp there was a couple fishing. We chatted with them for a few minutes and among the questions we were asked was "Aren't you scared of anything, like sharks?" Sharks? Thats news to me if there are sharks on any of the rivers we intend to paddle.

Our stop for the evening was in Pembina, ND. As we have maps of the4 Red River in the United States, we knew there was a boat ramp and even a motel in town. I ran into town to inquire about a room while Kobie minded the kayaks.

We were hoping for a town with a choice of motels, and outfitter and a nice place to grab some dinner. What we found was a town with one motel, one supermarket and two bars. Close enough.

We wheeled our kayaks the half mile to the motel and as we were getting them cleaned up a border control agent approached us. It turned out that someone had seen us on the river and called the border control. He was just checking that we did the right thing when we crossed the border. We were able to store the kayaks in the basement of the motel which was quite handy as it isn't necessarily easy to stay in a hotel when you have two 17 foot watercraft to be concerned with.

Kobie and I got cleaned up and went out for our big night in Pembina, ND. We hit up one of the bars as we were told we could get a decent pizza there. There happened to be exactly three other patrons in the place, not exactly crowded. We had a few beers, a pizza and the night ended with a Jell-O shot. Cheers!
Posted by Kevin Knieling at 6:14 PM