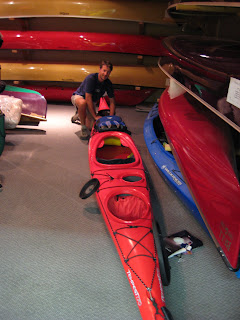 It took a little doing; some legwork and extremely helpful people, but Kobie and I are all outfitted and ready to start paddling tomorrow.

Our first course of action in Winnipeg was to check out the Red River, which we will be paddling for the next few hundred miles. We will be paddling against the current those few hundred miles, but fortunately the river isn't running very hard. Having not scoped out the river prior to concocting this scheme it could have been the case that Kobie and I would be doing the equivalent of running up a down escalator, but fortunately no.

We totally lucked out in that Winnipeg is a paddling city, so that we were able to pick up everything we need. That being said, we didn't have 100 kayaks to choose from, let alone a half dozen. We did however each find a kayak that fit us, if not our budget. It seems rather silly to spend nearly two grand on a 17 foot piece of rotomolded plastic. Its not like there are any computer chips in the thing. I was able to load up my boat with all my gear, food and water. My kayak may turn our to be a submarine when I put it in the water, but all the stuff fits.

I don't think I could go any further without giving a big shout out to Wilderness Supply in Winnipeg, especially Kat and Dawn. They helped in getting all our stuff together, gave us invaluable advice, loaned us a car, were more than patient when both of us initially had our credit cards declined (you would think after three and a half years my credit card company would stop declining transactions because they are large sums in foreign countries) and took us for a tour of Winnipeg. Thanks again girls.

So here we are in Winnipeg taking care of a few last minute things before we impose on our friends again to give us and our kayaks a ride down to the river. Wish us luck...
Posted by Kevin Knieling at 8:41 PM