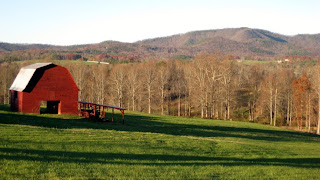 When I woke this morning I never would have thought I would hear the words, “the only way to get around the landslide is a 60-mile detour”, but sure enough, I would. Ten miles before the road was closed I saw a sign mentioning the closure, but I just thought, “nah, it won’t affect me”. At the turnoff for the main detour was where I heard the unpleasant phrase uttered. There were two guys standing around, the first seemingly taking pleasure in speaking that sentence. The second gentleman said he felt bad enough making cars take a 60-mile detour, worse still that I was on a bike.
I was able to find some video of the actual landslide here. There is a short commercial first.
After pulling out my map and posing potential routes to the pair of highway workers, I was able to cobble together a route that would only add 30 miles to my day. The first 10 miles of the ride were the nicest since leaving the Natchez Trace Parkway. I was pedaling through Cherokee National Forest. I checked the map at least several times to ensure I was going the right direction. In one instance a woman came out of her house and asked if I was OK. Following a brief conversation she offered me a ride to wherever it was I was going. Obviously, I declined. If only she knew.

It was when I was riding on tertiary and quaternary roads that things got interesting. Out of nowhere in the backwoods there was another detour. A detour on a detour if you will. There was a paving crew out paving an obscure road and the only route I could take to avoid the full 60-mile detour. The paving crew had differing opinions as to whether I could continue on that road. There were two issues really, the first if I could cross the river and the second if I could ride on the new asphalt. I had been told by several sources that I could cross the river on a cable bridge. My map showed a road across the river, but that wasn’t the case. I was also told that I could ride on the asphalt, but first I would have to ride a half mile on fresh tar.
I rode along, my tires sticking to the road the entire way. When I reached the work crew laying the asphalt I wisely opted to walk on the grass for a couple hundred feet before trying to ride on the road. I could feel the heat coming from the newly laid asphalt. I periodically stuck my finger in the asphalt and when my finger no longer penetrated the surface I moved off the grass and began pedaling.

The last three miles of that road were the newest road upon which I had ever ridden. It didn’t hurt that it was right along the Hiawassee River. While I still can’t figure out why they would pave that little stretch of road, I had no complaints…at least not for those three miles.

The new road came to an abrupt stop at a barbed wire fence. There was an open gate and a sign mentioning the fact that beyond the fence was US Government property and that there should be no trespassing. Inasmuch as the gate was open, I took that as an invitation to enter. Aren’t we at, like, terror alert orange? Shouldn’t that gate be locked so as to prevent giving people access to the hydroelectric dam?
I hurried over the cable bridge so as to not draw attention to myself. Once I made it over the bridge I got out of dodge as fast as possible. I already had one run in with the law on this trip, I didn’t need a second. The first four miles of road was a fairly soft dirt, though it did get better after that but it was still less than ideal. I rode where the ground was hard enough or not covered in rocks and walked otherwise. Fortunately there was more riding than walking, but my bike was taking a beating. It really wasn’t meant to be taken off-road.

I was winding through the Cherokee National Forest on a forest service road that had probably never seen a bicycle. My map was of limited use, heck, it said the road connected over the bridge. I was doing my best to make sure I didn’t turn off the main road or I could have traveled deeper into the woods.

As I bumped along I saw a truck coming my way which made me feel better about the trail I was on. You would think that I would stop the driver and ask my whereabouts, but no, I didn’t. Shortly thereafter another truck came past and I did ask if I was heading the right direction. I was.
In the 11 miles I had to off-road I destroyed my front tire. I was going to have to replace the tire after this trip, but it is now on borrowed time. The vibrations also loosened both my front and rear brakes. I was never so glad to see pavement

The remainder of the day went fairly smoothly, but the detour took a lot out of me. I eagerly counted down the last few miles to town. I had hoped to be about 40 miles further on, but things like this happen. My biggest disappointment of the day was that I could spend the night in Cleveland, Georgia following the night prior in Cleveland, Tennessee.

I will leave you with some video of me pedaling on the new road with the Hiawassee River to the right:
Posted by Kevin Knieling at 4:30 PM